What is Tapping?Science & ResearchFAQBe in the KnowWhat Is Tapping and How Does It Work?

A study published in the Journal of Nervous and Mental Disease, the oldest peer-reviewed psychology journal in the United States, found that Emotional Freedom Techniques (EFT) lowered the major stress hormone cortisol significantly more than other interventions tested.

In a randomized controlled trial 83 subjects were randomly assigned to a single hour-long session of EFT, talk therapy, or rest. Their cortisol levels were measured via a saliva test before and after the session. Cortisol was measured because it is known as the “stress hormone” of the body. As stress goes up, cortisol levels go up.

Originally designed to help us survive life in the wild, the “fight or flight” response was essential when our ancient ancestors were faced with sudden, brief danger like, let’s say, a tiger.

However useful in short bursts, releasing cortisol too frequently, as we seem to be doing in response to the ongoing or “chronic” stress of modern life, may have serious, even scary, impacts on our physical, mental and emotional health.

In fact, living in this kind of biological “survival mode” may be making us more vulnerable to everything from cancer to heart disease, and more. 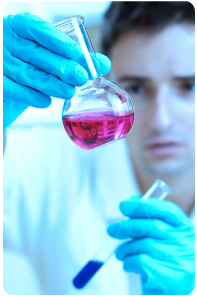 The normal rate of cortisol decline is 14% over the length of an hour. The 1st group (Tapping) demonstrated a 24% decrease in cortisol levels, while the 2nd and 3rd groups showed only the standard cortisol reduction that happens with time passing. The 10% improvement in the 1st group (Tapping) is statistically significant. The EFT group also exhibited lower levels of psychological symptoms, including anxiety, depression, and other, as measured by the Symptom Assessment-45 (SA-45), a standard psychological assessment tool.

Pyschotherapy alone relieves stress, but over a long period of time. The immediate benefits of psychotherapy don’t register in your body, where excessive amounts of the “stress hormone” cortisol still run rampant, putting your health at risk.

Tapping balances activity between the sympathetic and parasympathetic regions of your brain, producing “a neutral emotional state,” the gold standard of health and wellness. It’s also the state of well-being people have sought to achieve for millennia through meditation, prayer, yoga, and other mindfulness practices.

Dr. Feinstein, a clinical psychologist who uses EFT in his own practice, adds that EFT is an “unusually precise, rapid, and direct for shifting the neurological underpinnings of a range of psychological problems.”

In fact, he adds, “the number of therapists using EFT has been rapidly increasing over the past decade, and now peer-reviewed research is showing that their instincts have been right. Surprisingly rapid outcomes with a variety of disorders are being documented.”

“The Tapping group did report a significant decrease in their levels of test anxiety, as compared to the control groups.” – Dr. Peta Stapleton

You can read more about these results and other studies here:

“Summary of Published Research on Children/Youth” by Dr. Peta Stapleton

“The Science and Research Behind Tapping”– David Feinstein Ph.D.

At long last …
Findings from a world-first study aimed at scientifically proving a simple ‘tapping’ technique have shown the method is effective in reducing food cravings. This is the first time anywhere in the world that Functional Magnetic Resonance Imaging scans (fMRI) have been used to see physical, scientific evidence of exactly how EFT self-help techniques work on these conditions by changing the brain’s neural pathways involved in addiction and food cravings.

After 4 weeks (2 hours per week) of EFT Tapping, participants’ brain scans showed a remarkable reduction in activation. The control group who did not receive any EFT did not change.

“Based on my clinical experience and my reading of the research literature, EFT is the treatment of choice for rapid intervention in traumatic situations like Newtown that trigger overwhelming emotions in individuals and groups. Its use can prevent the future development of full-blown PTSD…”
-Eric Leskowitz, MD from the Department of Psychiatry at Harvard Medical School
Below are a number of excerpts from a paper written by David Feinstein, Ph.D.
Download and read the full paper.

“(Energy Psychology) brings about, with unusual speed and precision, therapeutic shifts in affective, cognitive, and behavioral patterns that underlie a range of psychological concerns related to disasters.”

“Energy psychology has been applied in the wake of natural and human-made disasters in the Congo, Guatemala, Indonesia, Kenya, Kosovo, Kuwait, Mexico, Moldavia, Nairobi, Rwanda, South Africa, Tanzania, Thailand, and the U.S. At least three international humanitarian relief organizations have adapted energy psychology as a treatment in their post-disaster missions.”

“The first tier is most pertinent in psychological first aid immediately following a disaster, with the subsequent tiers progressively being introduced over time with complex stress reactions and chronic disorders.”

“Energy psychology, as most commonly practiced in clinical and post-disaster situations, is an exposure-based treatment. The effectiveness of exposure therapies with PTSD and other anxiety disorders is well established. Exposure is, in fact, the single modality for which the evidence is sufficient to conclude, according to stringent scientific standards (National Institute of Medicine’s Committee on Treatment of Posttraumatic Stress Disorder, 2007), that the method is an efficacious treatment for PTSD. Other treatments that have strong empirical support in treating PTSD, such as cognitive-processing therapy, stress inoculation training, and eye movement desensitization and reprocessing (EMDR ), also generally incorporate substantial exposure components (Keane, Foa, Friedman, Cohen, & Newman, 2007).”

“Johnson kept a simple but ultimately provocative set of statistics during his visits to Kosovo and other areas of ethnic cleansing, warfare, and natural disasters. He tracked the number of people treated, the number of traumatic incidents identified, and the number of incidents where full relief was reported (i.e., hyperarousal to the traumatic memory was completely neutralized according to the person’s subjective report). Table 1 shows his tally. Johnson, who holds diplomate status with the American Board of Professional Psychology, acknowledges that such figures raise even his own skepticism. While recognizing that ‘well-controlled research is essential before results like these can be accepted,’ he affirms that the figures accurately reflect his experiences and that he ‘recorded them exactly according to what happened.’ After interviewing Johnson, the author of this paper interviewed several therapists who worked on these teams, and their reports corroborate Johnson’s.

“Johnson emphasizes that reducing the impact of traumatic memories with Energy Psychology, as reflected in the [below] numbers, is not the end of a person’s healing journey. ‘Often,’ however, ‘it is a new beginning,’ providing people an opportunity to rebuild their lives without the oppressive emotional weight of their traumatization.”

Also noted in this article, Lynn Garland, a social worker with the Veterans’ Healthcare System in Boston, reports that she, along with numerous colleagues using [Energy Psychology] in the V.A. (Veteran’s Administration), are having ‘dramatic results in relieving both acute and chronic symptoms of combat-related trauma’ (Feinstein, Eden, & Craig, 2005, p. 17).” 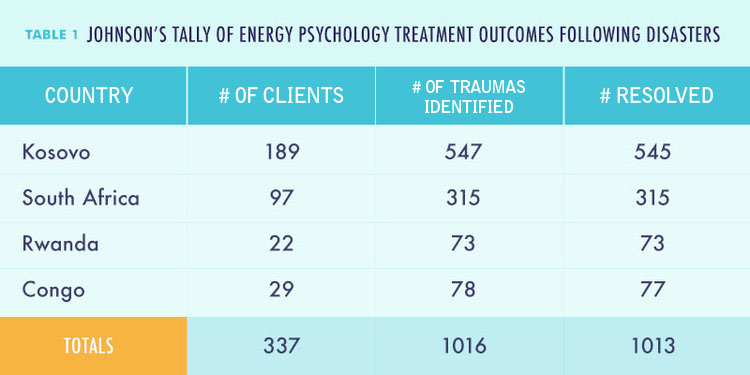 “Particularly poignant are reports that have been coming in from the Trauma Relief Committee of the Association for Thought Field Therapy Foundation about their work with the El Shadai orphanage in Rwanda. Many of the children had seen their parents die by machete during the ethnic cleansing twelve years earlier or were reliving the horrors of the massacre of 800,000 Rwandans. Daily flashbacks and nightmares were common, as were bedwetting, depression, withdrawal, isolation, difficulty concentrating, jumpiness, and aggression. Standardized pre- and post-treatment tests for PTSD (translated into Kinyarwandan) were administered to 50 of these children (27 boys and 23 girls), ages 13 through 18, and a children’s PTSD assessment tool for parents and guardians was administered to their caregivers. Treatment, provided in April and May 2006, generally involved three TFT sessions of approximately 20 minutes each. The tests were structured after DSM IV criteria for PTSD. Average symptom scores, based on both the tests taken by the children and the caregivers’ observations about the children, substantially exceeded the cutoffs for a diagnosis of PTSD. Scores after the three sessions were substantially lower than the cut-offs. Immediate reductions in flashbacks, nightmares, and other symptoms were common. Retesting a year later showed that the improvements held. Details of these findings are being prepared for publication (C. Sakai, personal communication, March 7, 2008).”

EFT TAPPING CAN HELP ALLEVIATE ALL TYPES OF STRESS

EFT, also known as Tapping, can help alleviate all types of stress. This video will show you the results Tapping can achieve and some of the studies Tapping has undergone: