Published By: The Tapping Solution

This post contains excerpts from The Tapping Solution for Parents, Children and Teenagers.

Isani had been in the foster system for several years. Angry with his mother, and suffering from neglect at home, even small provocations tended to throw him into a rage. On this particular day the school counselor had been called because Isani’s outbursts were disrupting his 12th grade classroom.

After several minutes spent convincing Isani that he had to come to the counselor’s office to talk, they both sat down. As soon as the counselor asked what had happened, Isani exploded.

Yelling as he told the story, he explained that a classmate had insulted him, and he’d had enough. To make matters worse, he hadn’t slept the night before because something had happened to his grandmother.

As soon as he paused to take a breath, the counselor asked Isani if he’d be willing to do some Tapping. He nodded slightly. He was skeptical, but willing to try it. Since the counselor couldn’t address the numerous issues Isani was facing outside of school, she focused their Tapping on his anger toward the classmate who had triggered him that day.

Within moments, Isani’s anger went from a 10 out of 10 down to a 2 out of 10. The difference in his demeanor was remarkable. Suddenly calm and focused, he recalled the insult from his classmate and shrugged. The emotional charge was so minimal, it barely even registered.

Several weeks later, Isani told the school counselor that he’d been Tapping at night before bed. He was sleeping much more soundly than he had in years, and it was helping him to manage his anger also.

Considering how much adversity Isani had been facing, it’s incredible that he’s been able to improve his sleep. The physical and emotional benefits of improved sleep alone are enough to change his life. Just as important, he now understands that he has the power to transform his emotions and experiences. That knowledge alone can and will change his life forever.

This story, shared by a high school counselor, is another great example of how useful Tapping is for releasing our most “explosive” emotions. 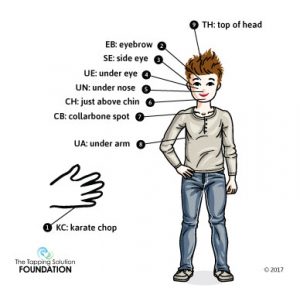 You can find this tapping diagram, along with many other free resources, by visiting our collection of parent and teacher items here.

Children & Teens in middle and high school often cling to rebellion. In addition to social pressure and the many other changes they’re navigating, they’re also facing challenges at home. The best thing you as a parent, teacher or counselor can do is to give them an experience of Tapping. For Isani that single experience quickly became a way to self-regulate on a daily basis.

Let’s do some Tapping on helping your child to release anger when it arises. To begin, have him or her rate the intensity of his/her anger on a scale of 0 to 10.

If you can, ask them to take a deep breath. Then begin Tapping:

Karate Chop (Repeat 3 times): Even though I feel all this anger boiling inside me, I’m great and I accept how I feel.

Eyebrow: I can feel quiet and calm now
Side of Eye: Releasing any leftover anger now
Under Eye: Feeling calm and quiet inside
Under Nose: Feeling calm in my body
Under Mouth: And quiet in my mind
Collarbone: Letting any remaining anger go now
Under Arm: Allowing myself to relax
Top of Head: Feeling peaceful in mind and body now

Ask your child to rate his/her anger now on a scale of 0 to 10. Keep Tapping on his/her anger, and any other related issues that came up while Tapping, for as long as s/he is willing, or until s/he gets the desired relief.

Tapping is especially powerful in the heat of the moment, when anger (or another emotion) is at its peak. If that’s not possible, ask your child to recall a time when they felt angry.

Use their words whenever you can.

If/when they’re willing, let them do the talking while they tap.

Avoid power struggles by respecting their boundaries, even when that means not Tapping at a time when they may need to.

Can I use Tapping for…? 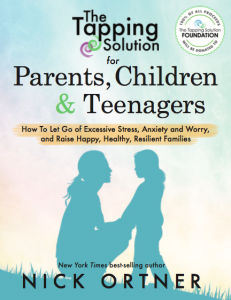 In The Tapping Solution for Parents, Children and Teenagers  you can read how Tapping can be used for many of your child’s needs, such as anxiety, impulsivity, social concerns, and MANY more!

Whether your child, or student, is dealing with common social issues, school-related anxiety, or a specific diagnosis, this book will support you in understanding your role and providing specific tools to encourage success and lifelong achievement.

The best part is that with every purchase of this book, 100% of the proceeds, in perpetuity, will be donated to The Tapping Solution Foundation to continue bringing free EFT Tapping resources to schools and families, and providing trauma relief around the world.

Tapping into Your Child’s Depression: Shedding “The Blues” Written by: Nick Ortner